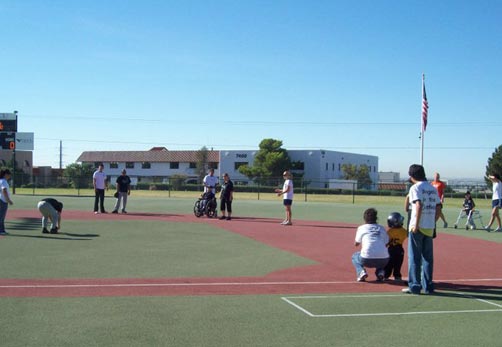 Our organization is always recruiting coaches, buddies and players for our spring and fall seasons. The League is now into our seventh year. We have partnered with the Junior League of El Paso to build a specially equipped baseball field that will give mentally and physically challenged children the recreational opportunity they deserve. Construction of the field requires special design, specifications, and detail in order to be accessible to children with disabilities. We broke ground January 2008 and the field was completed for play by April 2008.  Our building and facilities were completed by August 2008.  Currently, the field is located at 7500 W.H. Burges Ponder Park. Then in May 2011 the Junior League of El Paso Inc. turned over the field to us.

The Miracle League of El Paso needs volunteers who can help during games doing many different tasks, including shadowing a player, working at the registrations table, selling Miracle League clothing, giving out information, as well as umpiring, assisting coaches, league directors, league assistants, and manning concessions for the families. Schedules for the spring season will be set by the middle March. Games during the spring season will be scheduled for non competitive teams on Saturday mornings. The intermediate teams will be scheduled for Tuesdays and Wednesdays in the evening. The advanced teams will be scheduled for Saturday afternoons.

If you are interested in helping in any way please contact the office, 779-4770. We look forward to working with you in the future.